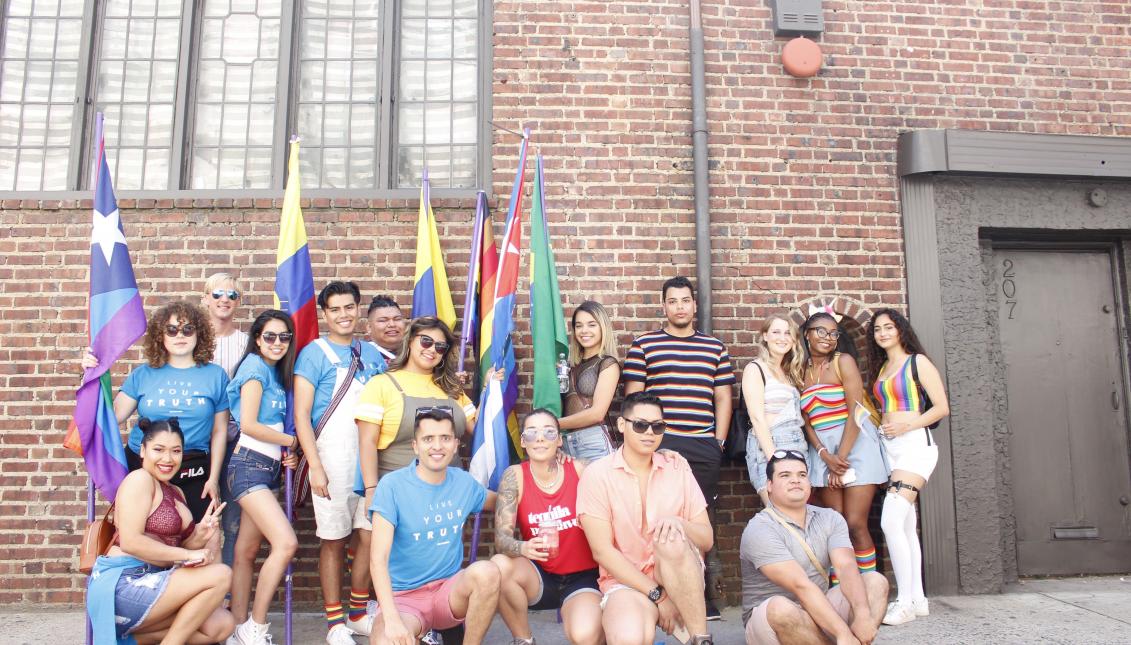 “Okay, Latin America!” said one bypasser as they walked by the group toting flags from Argentina, Puerto Rico, Brazil, Guatemala, Cuba, and other countries from Latin America and the Caribbean. “Wepa!,” cried one man in the crowd, reaching over the rail towards the Puerto Rican flag carried by one of the members of the GALAEI team, the city’s only Latinx LGBTQ organization.

The crowd and parade participants alike were ebullient at Philadelphia’s largest-ever Pride Parade. GALAEI’s float stood out even among the bright rainbow colors that could be seen everywhere. In what was an emphatic celebration of both their Latinx and LGBTQ+ identities, staff members, volunteers, friends, and allies hoisted the different Latin American flags alongside the traditional multicolored Pride flag.

Celebrating its 30th year in 2019, GALAEI has been an anchor for the Latinx LGBTQ community not only in Philadelphia but throughout the entire state of Pennsylvania — long before the Pride Parade was a mainstream event, accepted and celebrated by the majority of Philadelphians. Founded by poet, artist, and activist David Acosta, GALAEI’s original focus was to serve queer Latinx men in the midst of the HIV epidemic by providing access to the resources that were often scarce.

“While we’ve advanced so far in the HIV field today, and people can live long lives and healthy lives and we have amazing prevention programs like PrEP, we still know that HIV disproportionately affects Latinx gay men,” said Cortes, noting that the education and outreach around HIV testing that GALAEI does is as necessary as ever.

The organization’s work has expanded through the decades, though, to encompass a variety of community needs. It now includes a trans-specific program, called Transequity Project; a youth lab, which includes school programming; an online platform for those living with HIV; a new group called Guerreras, a social and empowering space for queer Latinx and Afro-Latinx identified women and femmes; and more.

Five years ago, GALAEI moved from its Center City location to West Kensington — a decision that was “intentional,” said Cortes, in order to root their work in the communities they serve.

“So many times there are these preconceived notions that Latinx communities are inherently more homophobic or transphobic, and for us, we see it equally across races, and what we actually see is that being visible in West Kensington, in a predominantly Puerto Rican neighborhood, with our rainbow flags, with our giant signs that say HIV testing, we’ve actually had a wonderful reception from the community,” Cortes said, adding that though some people are “shocked,” many are “happy that this is being normalized.

A focus on reflecting the communities they serve is essential to GALAEI’s process, said Cortes, who noted that “all of the organization’s staff are queer, trans, Latinx or Black-identified,” with a board that is similar.

On June 21, the organization will mark another milestone: the 24th consecutive year of hosting the longest-running LGBTQ prom in the country.

“This year we’ll be celebrating 24 years of consecutively offering a safe, free, affirming space for queer and trans and allied youth to come and just have a meal, dance, have fun, no charge, no expectation on how to dress, who you can bring — because even in 2019 we still have schools that aren’t welcoming and affirming for queer and trans youth to come as their authentic self,” said Cortes. “So until we don’t need it anymore, we’re going to keep on offering it.”

A place to belong

In addition to providing tangible resources and programming, GALAEI also plays an invaluable role in creating a sense of home for new Philadelphians like Raúl Guerra Chávez, a Guatemalan immigrant who identifies as gay.

Guerra Chávez was born and raised in Chiquimula, Guatemala, a dusty, scorching hot town on the border of Guatemala and Honduras. He studied at the local university there, the University of San Carlos, and was working hard, living his life — but “there was always discrimination.” When his parents found out he was gay, they kicked him out of the house. He had few options but to come to the United States around two years ago, with the support of his aunt. The first time he came to the U.S. and went out to a bar with his cousin, he “saw a different world.”

“I said to my cousin, ‘I can’t believe it, this is the world that I’m from,’” said Guerra Chávez.

Still, Guerra Chávez has to contend with the reality of being both an immigrant, and a member of the LGBTQ community.

“Being an immigrant here in the United States is very intense, but the fact of being an LGBT person is still more intense….You have two obstacles,” said Guerra Chávez.

“In part, they don’t accept you for being an immigrant, and in another way, over there you also weren’t accepted for being LGBT,” he said.

But Guerra Chávez, proudly toting the Guatemalan flag in the Pride Parade, said that he was hopeful and happy in his new home that he has created, in part with the support of GALAEI, whom he connected with when he first arrived in the city.

“I’m here because it’s a moment to celebrate with people from different places…there’s a lot of different people and they’re all here with the same purpose, to make everyone feel good, to make you feel comfortable, that you can persevere, that although there are still walls and barriers, you can continue forward.” 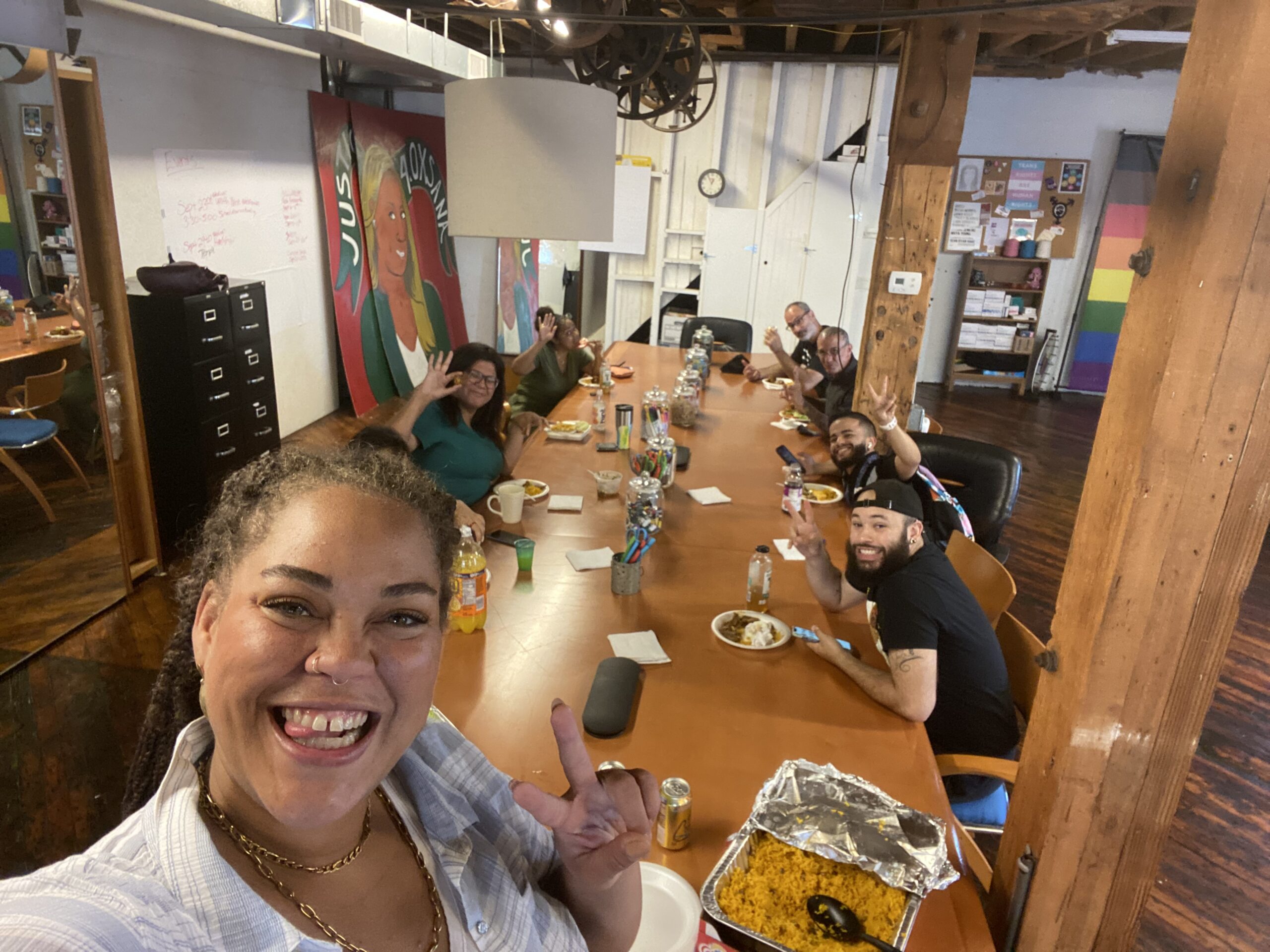 Galaei was founded in 1989 primarily for the Latinx community. But has grown into services, support, and advocacy for all QTBIPOC people.